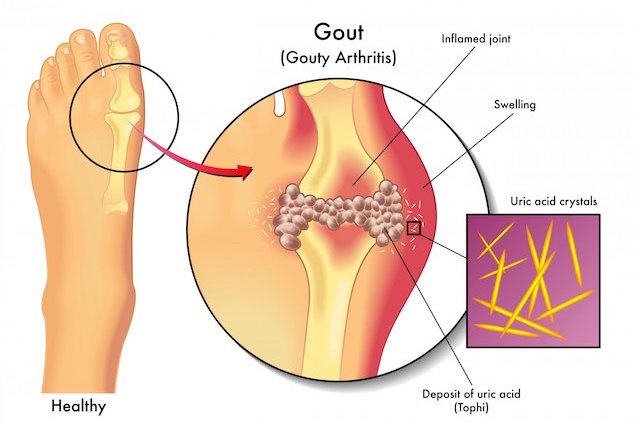 Gout is a kind of arthritis which is characterized by sudden, severe attacks of pain, redness and tenderness in joints, usually a big toe. Any joint may be involved in a gout attack and also it may be more than one joint. The most frequent sites being in the feet, ankles, knees, and elbows. Gout is most common in men but women become increasingly susceptible to gout after menopause. Gout is caused by too much uric acid in the blood. Many people with high levels of uric acid in their blood never get gout. But when uric acid levels in blood is too high, the uric acid may form hard crystals and deposited in an affected joint.

A typical gout attack can occur suddenly, often in the middle of the night with the intolerable burning sensation in the big toe and the affected joint become hot, swollen and tender. People who are overweight, drink too much alcohol, or eat too much meat, fish and certain foods that are high in chemicals called purines, have higher chances of getting gout.

Timing of treatment is important in gout. The speed of recovery is often related to how long after the attack, therapy is started. For example, if a patient begins treatment within an hour of its onset, the attack can often be resolved within a day or two. If the treatment starts after a week of gout, however, it may take longer to resolve.