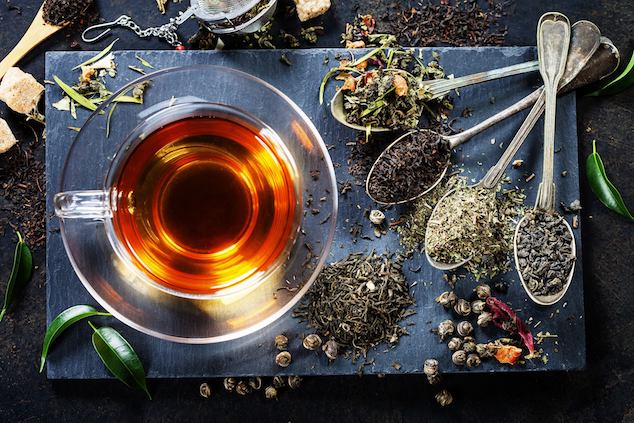 Tea is one of the most popular beverages consumed worldwide. Tea, from the plant Camellia sinensis, is consumed in different parts of the world as green, black, white or Oolong tea. There are many health benefits of different types of teas. Studies have found that the compounds in some tea may help battle cancer; reduce the risk of heart attack and stroke; encourage weight loss; lower cholesterol; and bring some mental alertness too. Also, it can be good alternative to coffee as it contain less caffein compared to coffee.

Scientists are finding more and more health benefits of green tea. Green tea contains the smallest amount of caffeine. Green teas are the least processed and tend to have the highest amounts of polyphenols, and the only type that contain the polyphenol, catechin. Polyphenols act as antioxidants. Green tea consumption has been linked to the prevention of many types of cancer, including lung, colon, esophagus, mouth, stomach, small intestine, kidney, pancreas, and mammary glands. Catechins have been proven to lower cholesterol and blood pressure and thus reduce the risk of stroke and coronary heart disease. Recent data from human studies indicate that the consumption of green tea and green tea extracts may help reduce body weight, mainly body fat. In the dental field, green tea has been shown to suppress the formation of plaque on teeth and preventing cavities. The tea contain a very potent anti microbial actions too. It has also been claimed that it protect against dementia and Alzheimer’s.

Black tea is made with fermented tea leaves and has the highest caffeine level. Studies have shown that black tea protect lungs against damage from cigarette smoke. It also may reduce the risk of stroke. Black tea is known to banish fatigue, stimulate mental alertness, and raise energy levels. It has been shown to reduce stress hormone levels and helps relieving headaches. Black Tea also contains antioxidants which may help protect body from the ravages of aging and environmental effects. Most black teas are especially rich in polyphenols which have been shown to be effective against age related dementia. Black tea is known for its antiviral and antibacterial properties too. It can be topically applied to cuts, bruises and burns, popularly used for sunburn relief. It has been shown that black tea has a positive effect on preventing tooth decay and gum disease.

Oolong tea is placed somewhere in the middle of a green tea and black tea. Green tea is unfermented and black tea is fully fermented, oolong finds the spot in the middle. Many oolong tea benefits are due to its antioxidant properties. One of the most commonly stated oolong tea benefits is weight loss. It helps fight obesity and promote weight loss by boosting metabolism and burning fat. The bioflavonoids in oolong tea help to fight the aging process, cancer, heart disease, inflammation, allergies and even improve physical endurance. It reduces the risk of heart disease by lowering bad cholesterol levels. Oolong tea specifically helps to reduce eczema outbreaks. Drinking oolong tea helps women who have experienced menopause to maintain high bone density hence prevents bone loss.

White tea is the least processed form of tea. It is kind of light green tea. White tea is abundant in polyphenols, catechins and antioxidants. White tea has the most acute immunity-boosting effects of all the four common varieties. White tea lowers cholesterol levels, enhanced fat burning. It improves reproductive and oral health. Research shows that white tea may help protect your brain health due to its high catechin content. White tea also has anti-cancer properties.

Black, white, green and oolong tea all come from the same plant -Camellia sinensis but are different in the ways that they are processed. They have minute differences in taste, nutrition too but they can all be included as part of a nutritious diet to help promote better health.